Plans are well under way for the Center’s 3rd annual Farm-to-Table Fundraising Event, which is to be held on Saturday, 22 April 2017, at the Nature Center of the Gilbert Agricultural and Rural Development Center.  Lunch will be served between 12 noon – 5:00pm. 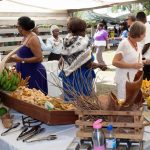 We are pleased to announce that our Feature Sponsor from last year’s fundraising event is again on-board with us this year.  The James and Maginley Charity and Care Foundation.  This year, in addition to providing funds for the purchase of Crockery, Cutlery and other items for this event, the Foundation has also made a major cash donation towards the success of the 3rd annual Farm-to-Table luncheon.
Also, His Excellency, Governor General, Sir Rodney Williams & Lady Sandra Williams have agreed to be the Patrons for this year’s fundraiser.
Exciting and innovative menus are being prepared by our Volunteer chefs, who will be using local raw materials provided by a number of our local Farmers/Producers. 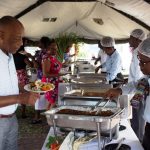 Come and enjoy a splendid afternoon in nature, with family and friends, while you enjoy the delectable variety of dishes which be on the menu.

The first ever Farm-to-Table luncheon was held in April 2015. It introduced visitors to the destination’s cuisine, with the food prepared using authentic, locally sourced island ingredients. The Farm-to-Table event was held at the Gilbert Agricultural and Rural Development Center (GARD Center) and it brought national chefs and farmers together to highlight and celebrate locally produced food and cuisine. 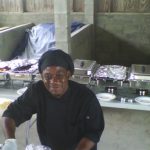 The Ministry of Tourism and the Antigua and Barbuda Tourism Authority congratulated the GARD Center on spearheading this initiative, which highlighted the linkages between the agriculture and tourism sectors. The Farm-to-Table luncheon has the potential to become a landmark event for the destination, and fits into tourism’s plans for the development of agro and culinary tourism. 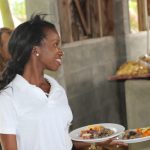 Many of the finest local chefs on show, were past graduates of the Antigua and Barbuda Hospitality Institute. These chefs have gone on to attain key roles at their respective hotels. Shirlene Nibbs, a Tourism consultant within the Ministry commented “This is a first for our destination and is a testimony to the quality of capacity building which exists in our local institution.” Nibbs acknowledged that Antigua and Barbuda’s “culinary expertise and creativity” were ably demonstrated “n a creative way by our local chefs at the Farm to Table Luncheon.” She expressed the view that the luncheon was “an example of the renewed linkages between the various sectors that we seek to establish which will further improve our product offering.”
CEO of the Antigua and Barbuda Tourism Authority, Colin James, said: “We are excited to be working with the GARD Centre, and the Antigua and Barbuda Hospitality Training Institute on this culinary collaboration. It will help to position Antigua and Barbuda as a destination, which continually seeks to offer something new to our visitors in their quest for an authentic Antigua and Barbuda experience. We congratulate the GARD Center for their efforts in spearheading this initiative.”
The farm-to-table movement is quite popular, and Saturday’s event presented a great opportunity for our visitors and residents to be exposed to exciting innovations in Antigua and Barbuda dining. Some of Antigua and Barbuda’s finest chefs used the island ingredients to create a wide range of dishes, reflecting Antigua and Barbuda’s cuisine and culture. Farm-to-Table restaurants were first created in the United States of America, in the 1960s, when it had become trendy to eat local, organic, or natural foods. The GARD’s Farm to Table Luncheon was supported by the Ministry of Tourism, the Tourism Authority and, Antigua and Barbuda Hospitality Training Institute. It was another one of GARD’s major efforts in achieving the national goal of increasing the consumption of locally produced food in Antigua and Barbuda.
Article adapted from Caribbean Times newspaper, released, 20 April 2015.